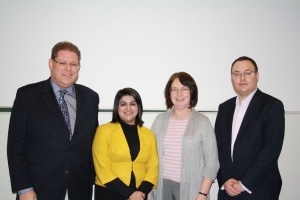 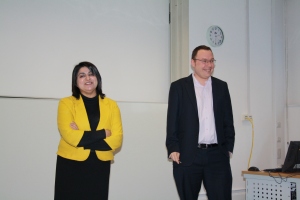 This is a guest contribution by LSS final-year student Silvia Maglione.

“I’m a Birmingham girl” Shabana Mahmood MP gladly affirms when opening her talk at Aston University on Friday January 28th, “I was born and raised in Small Heath”. Shabana is a Labour Member of Parliament for the constituency of Birmingham Ladywood which includes Aston University. She has also been recently appointed Shadow Home Office Minister by Ed Miliband.

In this event kindly organised by Dr. Ed Turner on behalf of the ACE, our MP gave a brief overview of her career and also dwelled on the topic of the Coalition government. Shabana started by pleasantly recounting how her passion for the Labour party played a preponderant role in her life. “I would work in London Monday through Friday as a barrister and then go back home on weekends for the party by distributing leaflets and doing volunteer work”. She was later successfully elected as an MP and saw the situation as “a massive roller coaster – that is how I would put it”

Ms. Mahmood continued her talk by narrating various instances in which her Oxford and Westminster training did not assist her in dealing with emotionally compromised voters, “there are things that you can only learn on the job”. She then faced a portion of the audience directly and reiterated her allegiance to Birmingham city: “It is an honour and a privilege to represent the city in which I was born and love” especially given the fact that “this constituency is in the heart of the city and it has huge challenges”. Nonetheless, Shabana later enunciated the fact of being “emotionally connected” and how her love for this city reinforces her work routine.

“Now…eight months of coalition [laughs]”. Unsurprisingly, Shabana was uncomplimentary about the current government, therefore emphasised the fact that “Labour had a very good election result in Birmingham” instead, and also that such coalition is “unprecedented in British history”. She mentioned how difficult it has been for her party to meet public expectation, and how happy she was that Liberal Democrats had not formed a coalition with Labour. In order to avoid polarising the audience, Shabana maintained a temperate perspective on the coalition and its policy-making by offering no controversial opinions on the matter. The discussion hence drifted back to election night and the “shenanigans in Westminster” and upheavals spurred by the Tories. In addition, it was mentioned how the existence of the coalition also changes small practical daily matters such as the fact that Lib Dems and Conservatives now sit close to each other and how it “affects the culture in which you work”.

Consequently, Shabana argued that as an opposition party there is a “level of frustration you almost have to get used to” and that “as an opposition MP it is unlikely to be able to vote down a major policy” nor to have a significant impact on governance. This relinquishing attitude was later challenged by a member of the audience who thought her behaviour on the matter to be “defeatist”, at which point the statement was retracted and renegotiated as “in Westminster opportunities are limited” because they have virtually “no power”. As a consequence, Shabana eagerly celebrated the Labour recent success of the School Sport Partnership Programme and highlighting the fact that Labour is able to affect policy after all, even as opposition.

The discussion then acquired a philosophical nuance when noting that all political parties were coalitions within themselves. The example mentioned was about the orange book Lib Dems and more liberal Lib Dems. Nevertheless, Shabana was taking the talk slowly to an end, ergo invariably stated that her experience as an MP until now had been “interesting and exciting” and that she is also looking forward to engaging constituents in several ways in local politics. She advertised a recently developed Neighbourhood Watch Scheme and indefatigably emphasised that she wants to focus mostly on the constituency and wants citizens to be “more active”.

Finally, she also advertised some internship positions in her constituency and in Westminster especially to Aston University prospective placement students. For more information on these internships please contact our placement manager Valeska Hass (v.a.hass@aston.ac.uk).

In conclusion, it was a very pleasant, engaging and interesting afternoon talk, as are all the ACE sponsored events. However, as I was originally expecting a heated and frenetic debate as the ones we have in Aston seminars, I was struck by the remarkable politeness and composed caution restraining the discussion. Indeed, if the same sedate atmosphere were present in the House of Commons it would be a more efficient one, albeit a prosaic one too.

All Aston students and staff are warmly invited to a talk by Shabana Mahmood, Labour Member of Parliament for Birmingham Ladywood, on Friday 28th January at 2pm in room MB550.

Shabana will speak about “Nine months of the coalition government”.

She was first elected to Parliament (representing the constituency which includes Aston University) in 2010, having previously been a barrister. Shabana was born and raised in Birmingham, and was president of her college students’ union. She was one of the first Muslim women, and Asian women, MPs. Unusually for a new MP, Shabana was appointed Shadow Home Office Minister by Ed Miliband, Labour’s leader.

There will be plenty of opportunity after the talk to put questions to Shabana.

Shabana is also advertising two placements for Aston students, one in her Westminster Office and one in her constituency office. Students on placement next year should already have details. She has kindly agreed to extend the deadline for these until after her talk.